Bootstraps, ♫I Wanna Dance With Somebody♫
Originally Performed By Whitney Houston 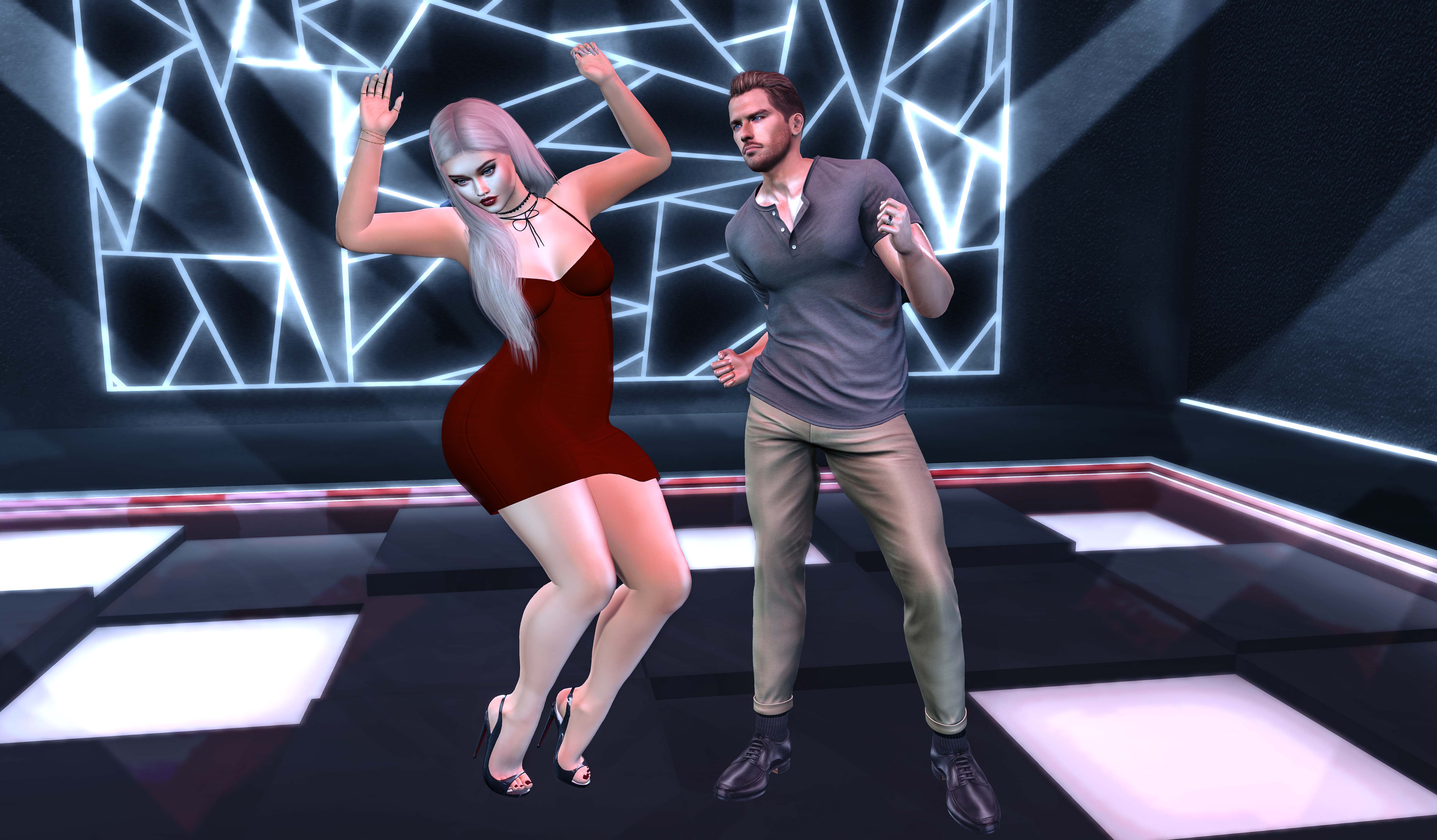 One of the things that excites me about Pose Fair is all the ideas that come from the items official bloggers receive to help promote the stores and the event itself. I am taking full advantage of this by doing something fun with the Vol. 1 Male and Female Dance Poses by CuCa Poses. From the exact moment the ad was released I had a solid idea cemented in my head.

It is an added bonus that “All Night Long Bacdrops” by illuZion are both gifts to visitors to Pose Fair. The poses and the backdrop that I am using in black (pink is also available) work hand in hand to provide a great scene for club life. My days of going to clubs have long since past (though the desire to go to them when I could was fairly low) but at least it is much different in the virtual world.

My first thought going into using these poses was that I wanted to showcase both the male and female ones and gives me a reason to include Brenna. She has a great style and could easily be a blogger if she wanted to be but I respect that it is not her thing; at least I can ask her to pose for me and she does it without hesitation and offers inspiration that is valuable.

Each of these sets has 6 poses with an added bonus pose for purchasers of the FATPACKS with mirror versions included also. I had fun going through the sets to choose the two best poses for Brenna and I to ensure that our motions look as fluid as possible.

Another sure thing when I began planning this scene is I knew what song would be the theme for it but I decided to go with a twist. “I Wanna Dance With Somebody” was the only true choice that I could go with and it’s one of the songs that put Whitney Houston on the map but I decided to use the cover version by Bootstraps which pays tribute to the original in an amazing way.

Either version would have been great to use but going with the more recent version was easier to decide on because everyone knows Whitney’s original version and I wanted to share with readers the cover because I am a fan of Bootstraps and if others find his work through me and enjoy it then it puts a smile onto my face.

There are very few things that are better than discovering new music.

For the ladies who love gachas (and I can safely say that many as well as us fellas do) there is the {Date Night} dress set from Vanilla Bae. If you are not familiar with this store and it would surprise me if there was someone who didn’t, they offer clothing that through scripting can be removed to show what I would politely refer to as unmentionables. They do offer unscripted versions for women that are not into that kind of attire. This set includes several versions of the Corset Dress which Brenna is wearing the short version (there is a much longer one with a slit along the side). The two RARE versions are both of the dresses in the adult version in all the colors offered, however, they are called Lootbox 1 and 2 because of the event they are in (which is called LOOTBOX).

On that note I think I have left you with enough information on this blog entry and look forward to the next few as I start to wind down my coverage for Pose Fair. This has been a very productive month for myself and the blog and if recent developments pan out (vague I know) there will be even more exciting things to share with all of you.

Keep your heads up and also the conversation (topic doesn’t matter!) It has been my honor and I will be back again very soon with another installment. 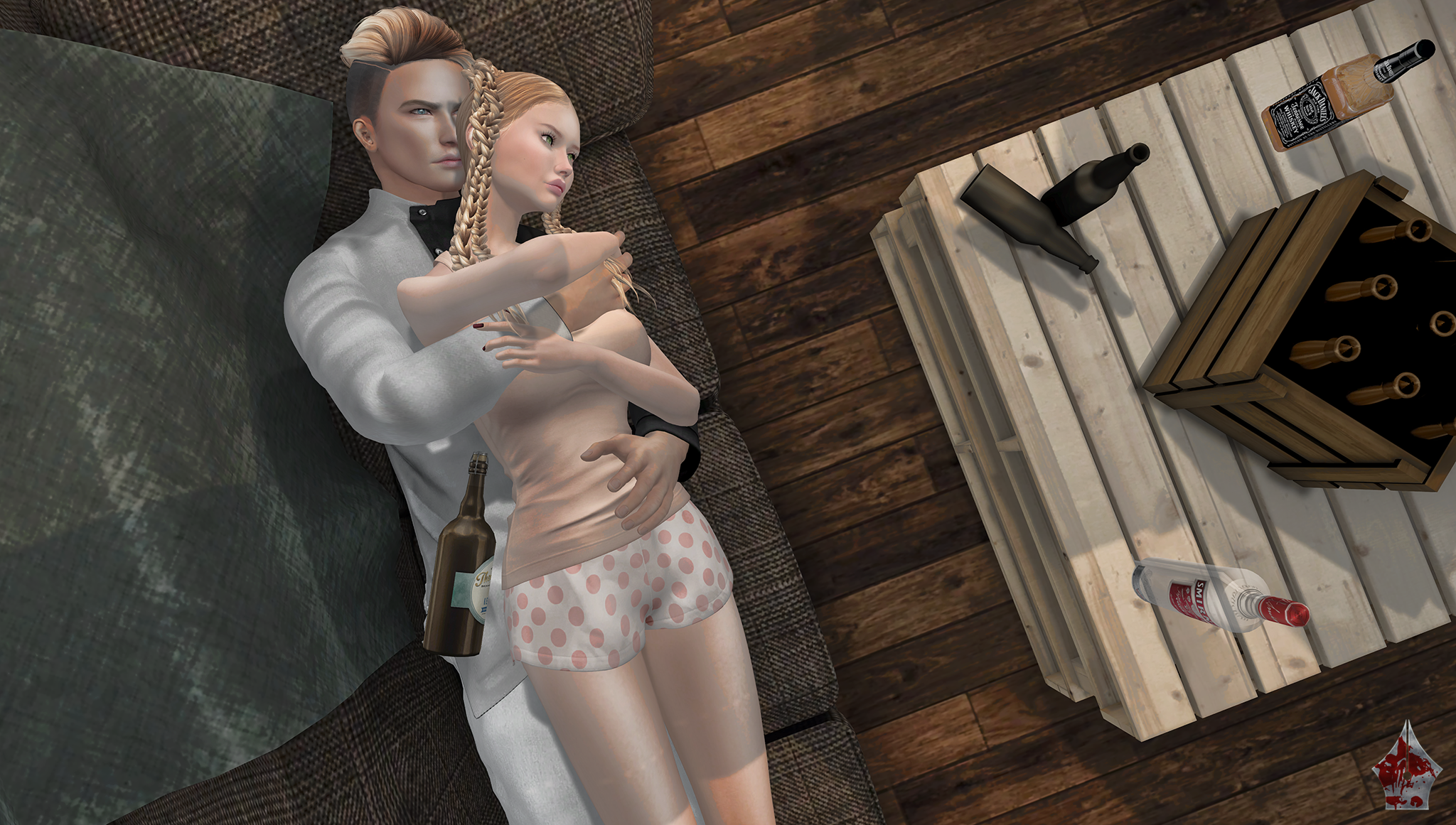 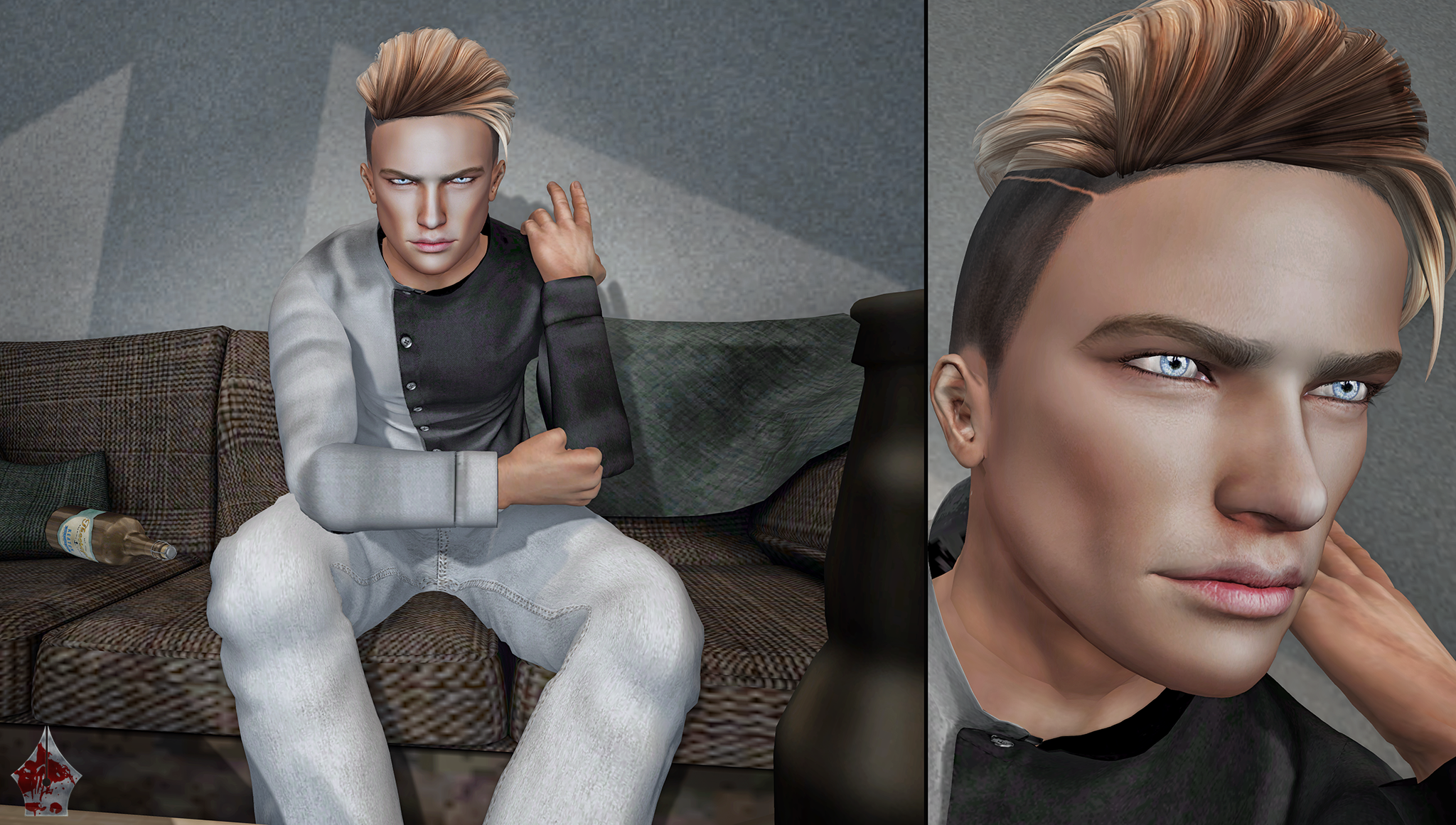 Every now and again I get requests and things to visualize my take on songs and some of them I know and others I get familiar with to get a good idea of how to represent it. This particular entry is one of those special ones that a friend of mine asked me to try and tackle. It’s one of those songs that only a fair of people know and surprisingly when I was asked I knew it but the key was to try and do it justice. I feel that I did it justice and with the help of my assistant, Bianca, I was able to make it possible.

The skin I am wearing was to be one of my last items for Skin Fair 2017 coverage but some things came up that I was unable to finish this until after the event ended but it is very likely within a short amount of time it will be available in their main location. It’s one of their first for the Catwa “Daniel” Bento head. I chose to go with the peach tone because it was the best fit between super pale and a more tanned version.

For my shirt, I’m wearing the “Constantine” shirt by Aitui that’s available at the current round of FaMESHed that ends on the 27th. I thought this pulled the idea together being that the inspiration for this entry is similarly titled. There are several different color combinations to choose from by I chose the “crow vs dove” version which essentially is black and white.

I paired it with the “Shoe Cut Jeans” in white by ::K:: and even though I am wearing the NX-Nardcotix “David” body, the best fit for these jeans was for the SLink Physique body which I was able to avoid clipping with the shirt.

Lost & Found has once again started a new round full of great items such as skins, poses, furniture & decor, and what I am featuring for this session: eyes. MESANGE just released the “Manderley Eyes” and you can get the 15 different colors individually or all together by buying the FatPack (which is easily the best value for really good eyes). These eyes have the standard mesh as well as an Omega Applier friendly HUD to be able to change them. Not only that but you get the choice of what size pupils/iris’ you wish to have with the HUD as well.

Tableau Vivant has a new hair that you can pick up at Men Only Monthly called “Hudson” it has a nice shaved hairbase applier included and is a side parted style that I chose to go with a rooted blonde color to try something a little different considering almost always I go for black or brown hair and occasionally blonde but not often.

The tanktop and shorts outfit is a part of the Tres Blah “Slumber Party” gacha that is still available at The Arcade until the 31st of March. It is definitely a cute addition to your closet for a night in.

I hope you enjoyed this entry and if you the reader may have a request, you can either contact me personally or leave a comment on the blog itself and I will read it and see what I can do with what I’m given. These are the kinds of challenges I enjoy.

There’s more goodies to come including items from Shoetopia which just opened a few days ago. Keep an eye out and I will see you again soon, here’s the credits. Until next time, stay stylish fellas and for the ladies keep it classy!

“I’m just trying to be the best me I can be
Oh when I fall down, it’s just me on the ground
I am no king, I have no throne“ 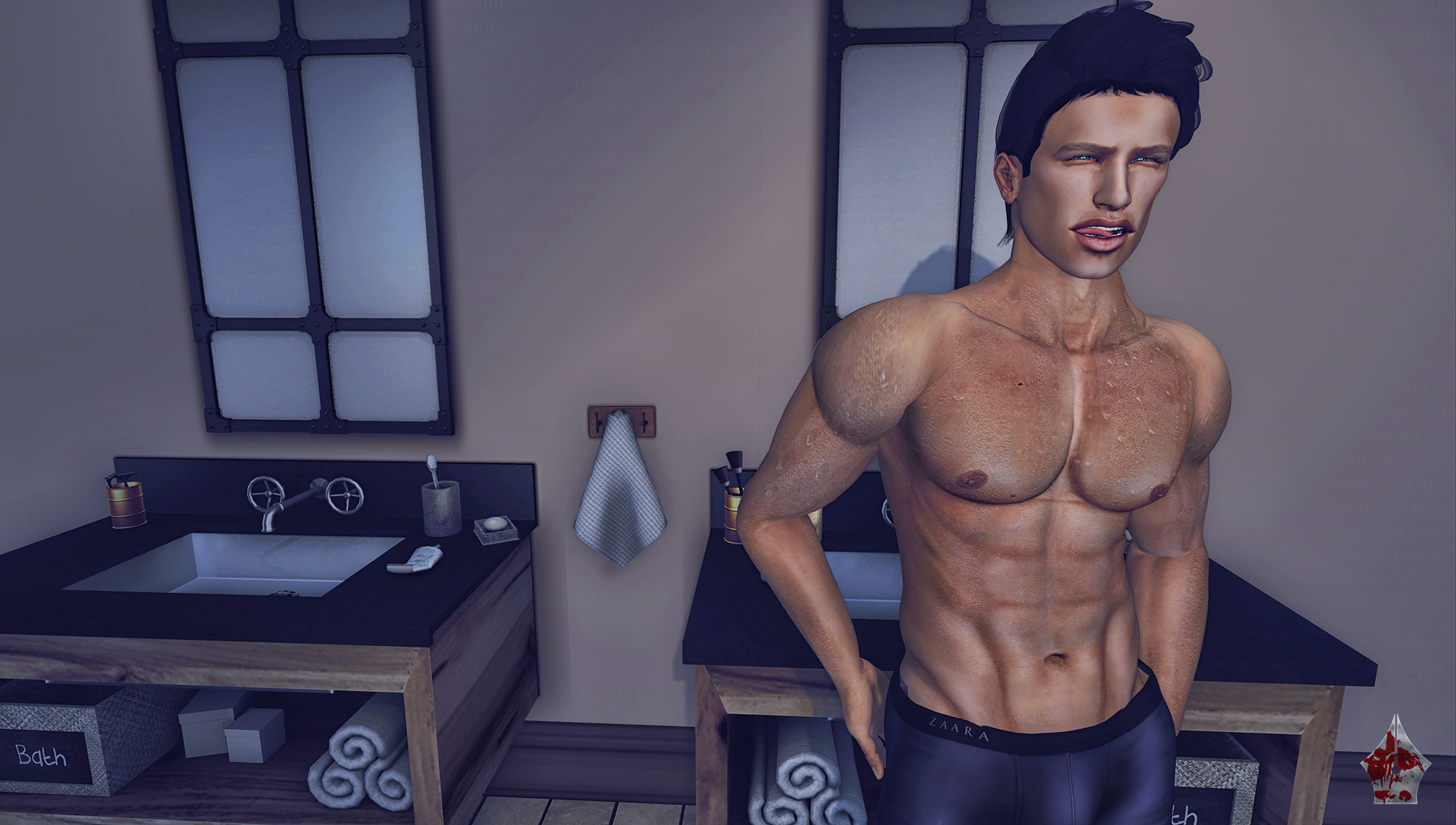 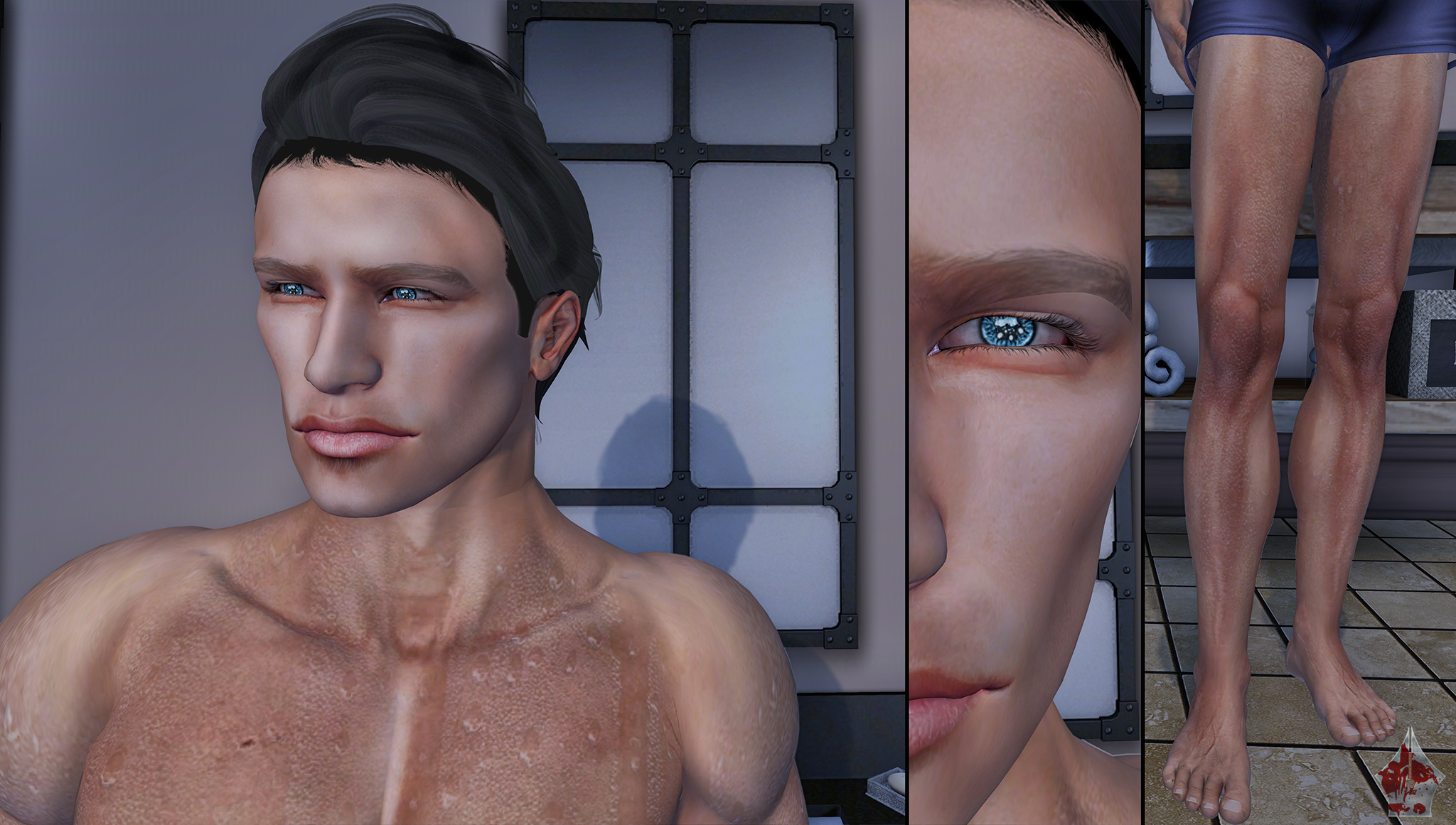 On the 17th of March, the male fashion world was introduced to it’s newest mesh body: NX-Nardcotix “David”. It is every bit as functional as others in it’s category. With it being more based on the original body schematic of Second Life, NX-Nardcotix has seemingly hit a home-run gaining an increasing fan base every day.

I am finally able to show you this body and give you more details from my perspective. Many others have already been able to blog it before me but it’s not who does it first or who does it “best” but it gives everyone an insight from different thought processes.

While there are not any clothes designed specifically for this body yet, the developer kit is out at the store for anyone who may want to tackle the task of giving us threads for this modestly sculpted physique. It’s not overly hulking in muscularity like the Nyramith products and is more in line with Signature in terms of tone. The SLink Physique is probably out of all the male body products out there the thinnest frame.

The included HUD that comes with it offers a staggering amount of alpha cuts to nearly ensure just about any Standard size garment will fit with the body until there are specific compatible counterparts. It also gives you the option to uniformly or singly change the color of your fingers and toenails if that is one of the things on your requirement list. It also has an option for compatibility with the SLink mesh feet with a little adjustment of your body shape.

As of this writing of this entry, NX-Nardcotix is in the process of making a Bento enabled upgrade of the body but until then you will have four different hand poses to choose from.

Also new for this look is the “Malik” skin from Modulus that is available at their new satellites store located at Designer Drive, which is a part of the Taketomi/Burley sim. Continuing with the brand’s trend of releasing ethnic skins, this Middle Eastern release compliments the “Rahiml” shape from REACH, which is still available for a few more days at this years Skin Fair.

Lastly, I am wearing the new “Nova” eyes from Go&See which you can find right now at their main store location. These 10 Catwa eye exclusive tones are very stunning and when looking at them up close can leave a person captivated for hours. I feel like they are a good conversation piece because of how beautiful they are.

Since I managed to squeak in one more item from Skin Fair, I’m hoping that I will be able to at least get in one last product before it closes it’s doors on the 26th.

One quick note for those of you who are pose enthusiasts, I’ve been informed by my great sponsors at Image Essentials that they are holding a 25 linden sale on older poses at the store to make room for new stock including Bento enabled poses. You better get there quick though because this sale is only going on for a week so if there’s something you might have had your eye on…now’s your chance! Your ride awaits down in the credits so go do it!

I’ll see you on the way round, until then stay stylish fellas!