Oh, I could hide ‘neath the wings
Of the bluebird as she sings
The six o’clock alarm would never ring
But it rings and I rise
Wipe the sleep out of my eyes
My shavin’ razor’s cold and it stings

End of the month time and there’s some exciting things on the horizon for me as May brings in not only the start of much nicer weather (I hope) but also the next incarnation of Pose Fair. With all of the previews I have seen of the things that will be for sale there, I know that a lot of photography enthusiasts and bloggers are going to be chomping at the bit to get their hands on things. 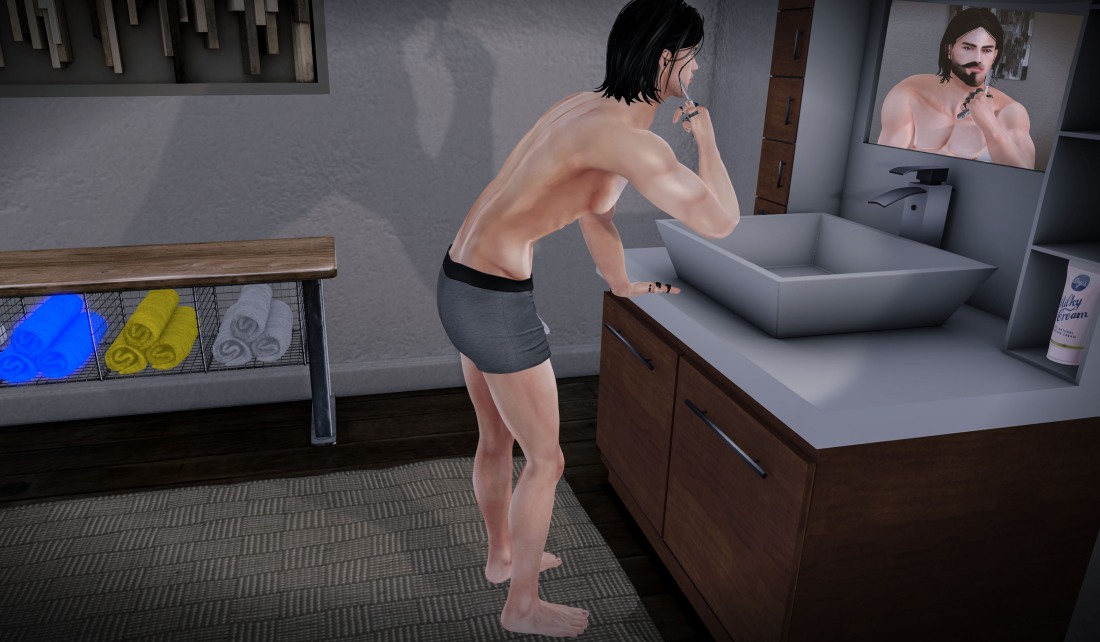 Not knowing where to begin I decide to start with a gacha pose set from Navajo called “Let’s Shave”. The set has 8 poses all together with two being couples poses but there are times when I’m featuring gacha items I pick one of the commons but this time I decided to change it up by displaying the single RARE pose that comes with sink and razor props.

I’ve never really done a shaving scene before and it’s about time to do so; it was fun setting it up and it ended up inspiring me to change up the setting of my own bathroom though most of it didn’t get caught in the photo itself. The shoot ended up being productive on several fronts and I like keeping my mind occupied because if it isn’t then it tends to cause trouble for me. *insert chuckle here*

After I finished taking photos and a little touching up/cropping I thought to myself I have no idea what I wanted to use for the soundtrack so the rest of my evening was spent figuring that out. I finally chose the classic “Daydream Believer” by The Monkees as I enjoy them (yeah most younger people are probably thinking wtf but give it a try it isn’t going to hurt). The song has a reference to shaving which ties everything together mostly so there we go.

I‘m looking forward to the creativity that will be brought about with Pose Fair as more than anything I’ve began to consider myself more of a artistic blogger that specializes mostly in fashion but it’s poses that really help bring my ideas to life. I’m not sure if there’s a way to describe that but if there is and anyone out there has an idea of what it’s called then feel free to let me know.

This round I’m going to try and balance the singles male poses with couples poses and possibly throw in some single female things too when I’ve met my requirements to spread out my portfolio as well as manage to pair some of the items from stores I blog. 2019 has been about branching out and so far I am not sure that I’ve fulfilled that as much as I’ve liked to but still plenty of time to catch up to that.

“How do you smuggle daydreams into reality”
David Mitchell

The weekend is almost over already and it feels almost like it just started but oh well what can you do right? I needed a day or so to recharge and am back to what I know best and that’s showing off stuff I like and telling the world what I think about it in the best way I can (even though sometimes it comes out awkward).

A week of Skin Fair 2019 has gone by with another week left (it ends on the 24th, exactly a week from today). I’ve had a blast showcasing items from the event and there is still plenty more as well as ones you might not expect to see in a post here. Yep that’s right I am going to put my spin on some Skin Fair goodies that I might not have done in the past.

Today’s blog has items from stores I’ve blogged for the fair but have released more than one exclusive. I am going to start out with another skin from Vendetta in which is for either CATWA and Omega which is different from the last skin I featured as that was for the LeLutka specifically. It is a very youthful skin for those of you who tend to want your virtual selves to look younger but I’m sure that you can give it a more seasoned look with the right facial hair.

I paired it up with the “Desmond” shape from West End, which is for the CATWA “Daniel” head; both of them combined I think make a great combination. When I am looking through things and pairing them at random I never know what the results will be but with the look I put together here it turned out to be a good mix of designers. 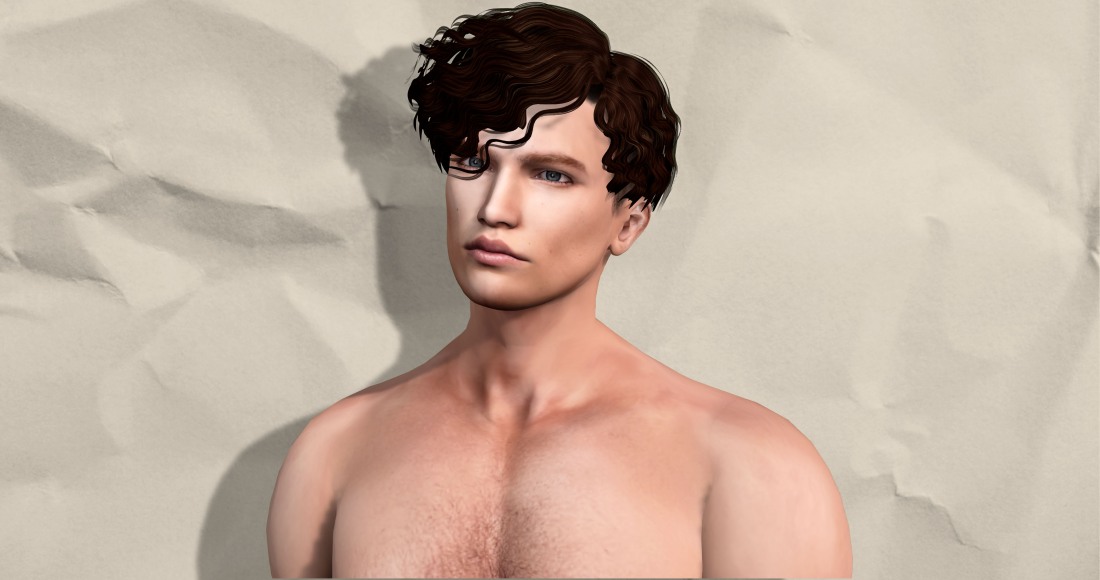 Time for me to also get a bit deeper into this current round of The Men Jail which has really been chock full of things (some of which I may not even get to blog before the round ends). I’ll start though with the Zule Hair by Letituier, which is a medium length curly hair that has a slight part on the left side. I would say this style has a lot of volume to it. The style itself is not one that I’ve worn much because it is not often that designers create it.

My awesome shirt is one of the latest from Gild. Garrete killed it with the “Interval-T One Arm” shirt, which is more like a modified turtleneck in retrospect as the neck is a bit longer than your usual sweater or shirt. There is also a slanted intended slash across the middle of the chest/abdomen area as well as the right arm completely missing to give it a unique fashion look.

I love standard clothing (jeans, shirts, jackets and the like) as much as the next person but wearing creative and functional items like this is also fun too. It also allows for a bit of fresh air to come through in these blogs so that they don’t get as stale as they could with wearing the same type of clothing all the time.

Rounding out my review of TMJ items in this blog is for the pose set from Navajo. I see their pose set ads on Flickr quite often and when I saw this set come through as part of the event, I found the right setting to use it at. “Bento Static Pose Pack 11” is a set of smoking poses with two of the poses having a mirrored version (a mesh cigarette for either hand is included).

I am not a smoker personally (I was a very long time ago) but it just wasn’t really a good plan for me personally so if I can do it without harm virtually then (or in a potential role-play situation) that’s fine but I also at the same time am not promoting it. I see younger people take it up at staggering ages as compared to when I was in that age frame.

Today is also St. Patrick’s Day, many people all over the world (that are not likely even Irish) will celebrate by drinking copious amounts of beer to eating Corned Beef and Cabbage (which is also a tradition on this day). I myself in the real world are not Irish but my virtual heritage is so I am getting together with a few friends and just hanging out.

I hope that anyone who is out there celebrating that you stay safe and make sure you get home as well without any trouble. Many will wake up with the headache the size of a double decker bus but hit the shower get some coffee and swallow down a few aspirin and get back to it. Fun start to the week for that lot of people.

On that note I am gonna take the opportunity to wrap up this post and leave you all with the style credits. Enjoy the last remaining hours of the weekend and see you back here again for the next one…byeeeeee!

And I’ll hope that Saturday will be the day
When everything feels okay.