Ramin Dijwadi feat. The National, ♫The Rains of Castamere♫

Tomorrow marks the end of an era as HBO will air it’s finale Episode of “Game of Thrones”. Many of my friends and colleagues were huge fans of the show and tried for a long time for me to watch it but at the time I was engrossed in something else. It wasn’t til very recently that I broke down at the behest of my Brenna and also Lucky that I told them I would make sure to catch up so that I could watch the final episode the night it aired. I’m very close to achieving that goal and have been consumed by it; watching it feverishly. Now knowing what everyone else knows that are fans of this show…that it is epic. 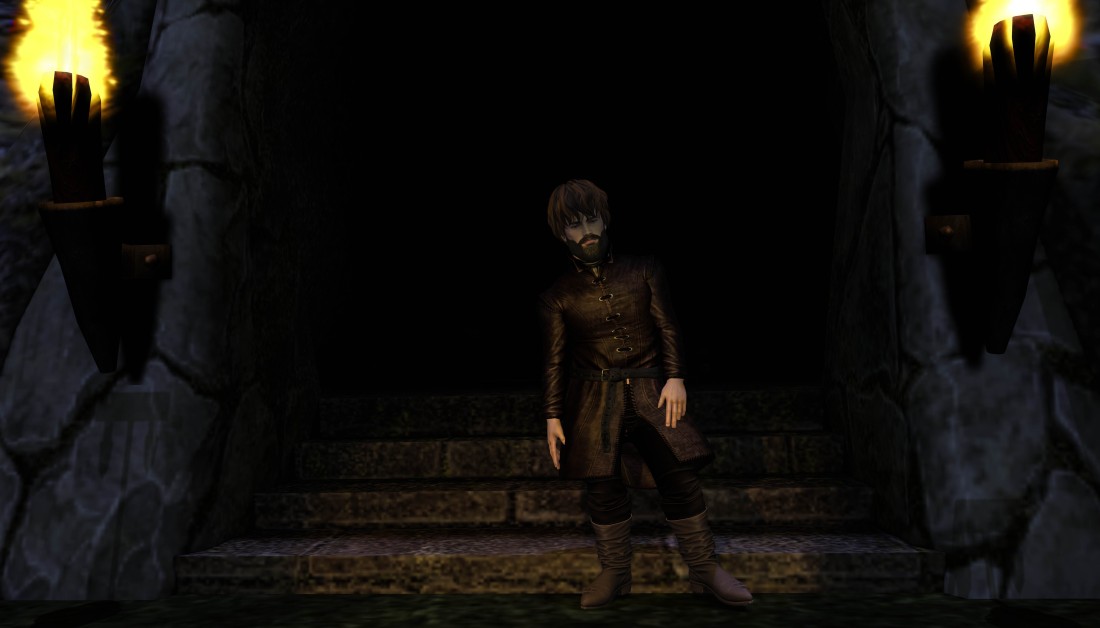 Everyone has a favorite character whether it be Dany or Jon (who are probably the main two that people are fans of) but the one person that’s stood out to me with great writing and even better acting by Peter Dinklage, is Tyrion Lannister. The character comes from a house full of really bad people and while he’s not necessarily clean himself, he’s proven to me at least that he has the most heart and he thinks very hard before he acts. The world he comes from looks down on him for being a dwarf and with everything set against him has come along way from where he started.

I’m not sure how the story will end which is the fun and scary part about any show so I will be waiting along with everyone else to see exactly how it all plays out.

I was certainly worried about how well poses would work after shaping myself like a dwarf but luckily with the cool “DYLN” pose set by DAE, which is available right now at Pose Fair, it all worked out very nicely. DAE is a store that can be filed under the stores that I’m not as familiar with but I have heard of them before, I just have never really utilized them until now. With covering all the different stores for my coverage of the Fair, I usually try to choose several that are not sponsors or stores I see in every day conversations.

The actual pose from the set that I chose looked and felt to me like something Tyrion himself might do on the show and wouldn’t essentially be breaking character as essentially when we do scenes that are homages to something we try to keep it as true to the source as possible. When the idea came to me I was pretty excited.

Image Essentials provided the backdrop that makes up 3/4 of the scene outside of the torches from Aisling and myself. While it is harder to show features of something like a prop, I can give you the pertinent info that is necessary. It’s an original mesh item that can be resized by a menu that comes up when clicked in case you want to make it monstrous.

That brings me to what I’m wearing and it’s definitely a mix of things and much like the last post I did (even though it was female items) it’s comprised of mostly gacha items and one new event item which happened to coincide nicely as far as timing went to do this post. Many creators lately have been doing items that were inspired by the show and even the Enchantment event is fully dedicated with their current round currently titled “The Iron Throne”.

Hotdog has made the tunic I am wearing that is a part of Enchantment; it’s called the “Casterly Rock Tunic” and it’s very nice. There are two versions to it (I bought the leather version as it suited me better than the noble version). It comes with a HUD that allows you to change the outer part of the tunic as well as the inside part as well. It’s not fitted for a specific body so with the right alpha cuts it should work with the main bodies currently out there (save for maybe Aesthetic but for those of you guys with that at least check the demo!)

The pants and boots come from the “Fire and Ice” gacha set by RIOT which was a part of The Epiphany April round. It is likely now in their main store and has sizes for both Belleza (Jake) and Signature (Gianni). The entire set for the males is truly super cool and for fans of the show it’s very accurate with touches that any enthusiast will notice.

There have been a lot of photos I’ve seen that have been GoT themed and many of them are awesome, I hope that those of you who do see this post will think that I captured the essence of it. One thing I know is that it was a lot of fun putting together and will likely do more themed from the show even after it ends as I have a lot of making up for that as well.

Just because the show is ending doesn’t mean a fans love for it will.

“I drink and I know things”
Tyrion Lannister