Florida Georgia Line, ♫It’z Just What We Do♫

It’s the anniversary month for me as a blogger and there’s a lot going on for March so I am going to try and keep it rolling as best as I can to make sure I cover a lot of great things from events like Skin Fair, The Men Jail and The Men’s Department to stores like Cold-Ash and Native Urban. The energy I am riding on right now is great and I decided to visit Whimberly to see if I could find a spot for a photo.

I thought it would be fun to kick back and have a few cold ones to celebrate some of the milestones that I’ve accomplished lately as well as the aforementioned anniversary of blogging on my own (most won’t remember that I started blogging as part of a team for a site before I branched out). 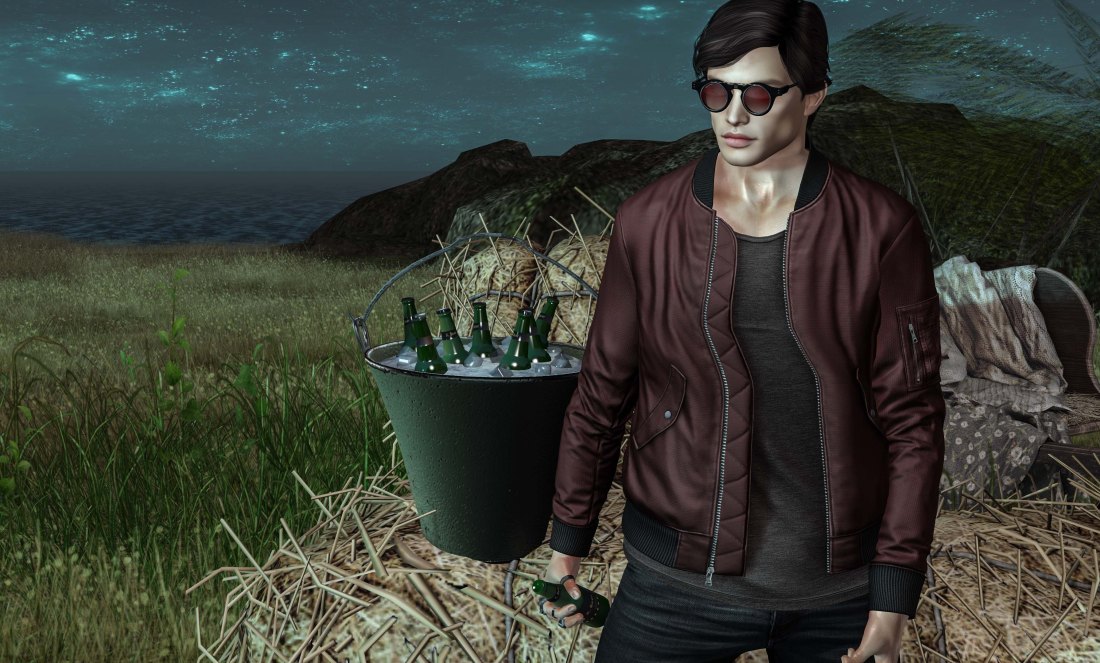 The Men Jail opens up for a new round tomorrow and I have utilized a few items that I thought were fun. Since I already crossed off Corey Hart’s “Sunglasses At Night” I needed a different tune so with a scene that screams country I decided to go with one of my faves of the genre, Florida Georgia Line. I’ll be the first to say that Country is not my first choice when it comes to music but there are some really good artists and songs that are within the genre.

The sunglasses I have on are from a new designer/store that I have not heard of before named Ultraman Creations. The “Emperor Glasses” are pretty stylish and my favorite part about them is that they flip up revealing regular lenses. Reminds me a lot of the character of Dwayne Wayne played by Kadeem Hardison on “A Different World” though the style is a little different they still have the flip up action in common. The included HUD gives you the option to choose from 3 metals on the intricate part of the frame and 4 on the outside lenses. There is also a special section for the outside lenses where there are graphics like hearts and x’s as well as “Bad Boy”.

All in all these are a pretty fun pair of shades and it is not something you see a lot on the grid. I applaud the effort of Ultraman Creations and look forward to seeing what other types of products the release in the future and when someone asks about them, I can say I was one of the first to feature them on These Conversations Kill.

The other item I have from TMJ is the “X. Beer Bucket” by X. Store (another new store that I’m just getting acquainted with). While the main function of the bucket is to be worn by the owner (from which beverages can be dispensed to anyone who clicks it), I’ve chosen to use it in a different capacity as a decor function. It also comes with a bottle of brew that has a hand hold animation when worn.

Pretty soon the weather will get nicer and there will be in-world barbecues and this will definitely come in handy for the brew consumers in your circle or family. Give it a closer look when The Men Jail opens tomorrow along with many other offerings this round.

I have a new jacket to wear courtesy of Cold-Ash by way of The Men’s Department. Much like the last release the “Ryan Bomber Jacket” comes with an option for a hooded sweatshirt or a regular shirt; considering I wore the hoodie version with the last release even though I love them I have to at least be fair.

With the FATPACK there is 9 different jacket colors with 11 different hoodie colors and 10 shirt colors which makes matching it up with the rest of your wardrobe as easy as can be. I chose to wear the red (or crimson if you prefer) color to go along with the red tint of the lenses on the glasses. I could have gone with blue but I wanted to have some contrast between myself and the night sky in the photo.

One hugely positive thing I can say of Cold-Ash is that while there may not be releases for every event under the sun, the events the store participates in get a high quality item because CA doesn’t take shortcuts or rush things just to make a deadline and that is something I can appreciate as I’m sure everyone out there does as well. With there being several more weeks of the cold going on I am nearly positive this will make another appearance before the weather turns decent.

I am going to take this opportunity as I have plenty to blog this month to wrap things up as quick as possible and turn over to the credits. Hopefully if you aren’t able to get out to shop before the weekend that set aside some time to visit some of the latest rounds of events and visit some of your favorite stores as you never know if you’ll stumble upon something new.

Another one is in the books but I’m looking forward to what is next and I sure hope that you all stop back again to see what I might be up to but until then…see ya! P.S. Go visit Whimberly it’s an awesome place for photography!!!

Time to get your buzz on and your love on, all night long,
And if you play your hand right, you won’t have to go home alone.