One day my father—he told me,
“Son, don’t let it slip away.”
He took me in his arms, I heard him say,

“When you get older
Your wild heart will live for younger days.
Think of me if ever you’re afraid.” 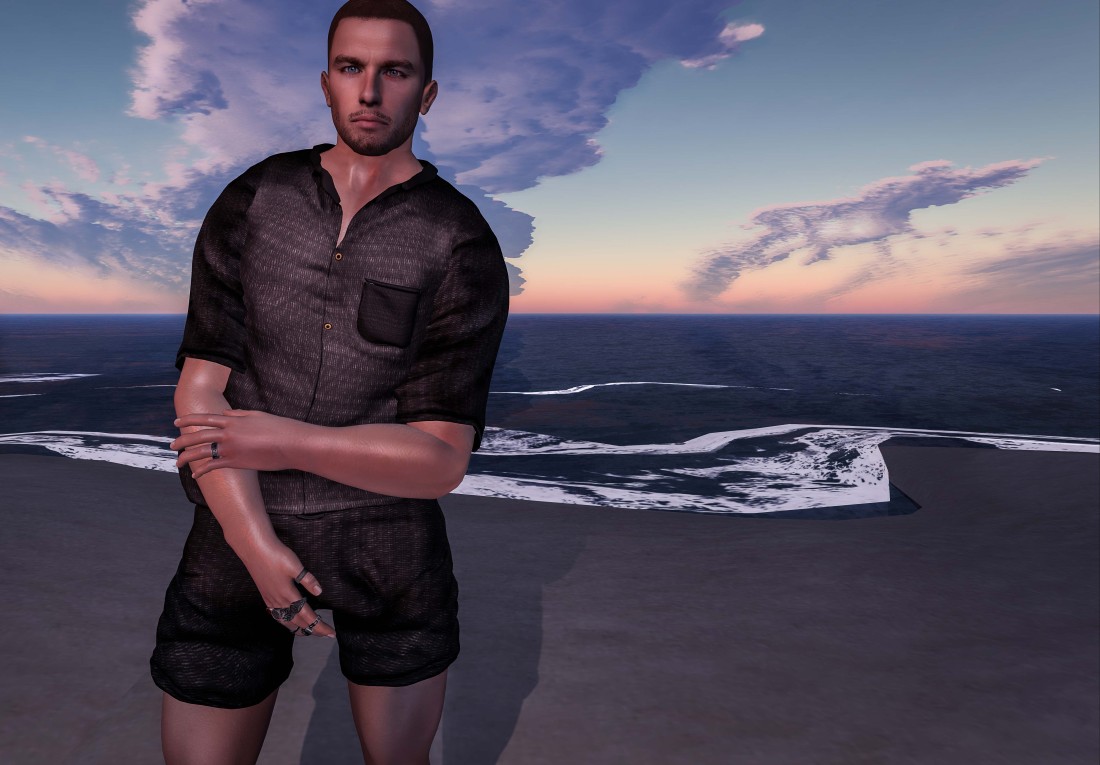 Now that my area is beginning to thaw out from the negative temperatures, I thought I’d throw in a post to try and warm everyone (including myself) up. Even though I have never been much of a beach going person in the real world I still hold an appreciation for it. In the virtual world I tend to go to them to admire the beauty they possess and to also send positive warmth as best I can.

This blog entry if anything is another test of sorts of getting back into the swing of things before my event duties begin. The pose that I’m using is from a set that I used from the January edition of Pose Fair (that ended about a week ago which is also when I came down with a bit of a cold). Lush Poses “12 Months of Hunkiness” is a versatile set to say the least because it gave me the ability to do the shower scene in a previous blog and now to standing on a beach giving off a confident masculine vibe.

My focus for this blog though is the outfit I am wearing. I was recently contacted by Luis Crowne, owner of MAZA asking if I’d be interested in blogging an item from his store. This is a thing that is partially new to me as I’ve always applied to be on blogger teams save for certain situations where store owners know that they are able to count on me if they send me an item, knowing that I’ll feature it. Review copies are an option that I will continue to entertain as long as the fit is right.

The “Summer Jumpsuit” was inclination enough for me to borrow a beach build that my brother, Lucky, had created to take a few pics himself; I wanted to make sure that I got it in before he decided to pick it up.

Getting back to the jumpsuit, I really liked the design in the “Grayish Black” version even though there were several other choices in the collection I really liked. The texturing is rather nice as well as the way that it works with lighting along with the combined windlights and lighting culminated into a beautiful scene that at its core was peaceful.

I’d like to thank Louis for thinking my work is worthy enough for him to approach me to showcase his work; I hope that we can also work together again in the future!

Doing shorter blogs like this makes it easier on me as far as it isn’t as time consuming as when I do one that is loaded with items because as anyone that visits this site on a constant or semi-constant basis knows that I tend to wordy. I also tend to lead myself into run-on sentences which probably make it unbearable (I do read back things sometimes a day or so later and wonder what I was thinking).

On that note I believe it is time to get to the credits which there are not as many of as I just mentioned but you’ll know the items and where to get them and that is the most important thing to me. I started blogging because I once contacted a blogger about an item and they were reluctant at best to tell me where the item came from. As it turns out it was something that was no longer available (which I’ve also made it a point to tell people in my blogs).

I hope everyone is doing well and staying warm, safe and living their best life. See all of you again very soon!