I’m working harder than a hundred black mules down in Mexico.
No water, no clouds, no cover,
from the hotter than Hell no dinner bell,
empty oven again from another bad opinion.

Nonpoint, ♫Bullet With A Name♫ Fierce Friday…well maybe not for everyone but it sure is for me.

I was blessed to be able to work with a photographer that I’ve been wanting to do a collaboration with for the longest time, and finally I got to meet up with Travis Olbers and put my spin on the scene that you see above. He’s already posted his version of it which you can find on his FLICKR page and I really think his turned out great and it inspired me to try and do just as good of a job; I think in the long run that my version came out strong and quite like I saw in my head.

My theme for this post was quite easy considering both of us were both carrying some hardware with us preparing for the cleansing of the location called Alien Asylum (which I had never visited before until now). I feel like a good backstory behind the scene is that the two of us are hired mercs and were paid to clean out a location with our “expertise” and the photos that both Travis and I took capture the two of us leaving after causing a whole lot of chaos….which I am particularly good at in certain circumstances. When I got the call from Travis I hadn’t had any plan for my next photo so this became an impromptu session but I was able to turn it into a blog post instead of just posting it on Flickr having done it just for fun (which it was fun but it gave me extra incentive). I had recently made a second trip to the Mesh Body Addicts Fair because I really wanted the beard that I have on. It also gave me a reason to break out items from the Gabriel gacha at The Epiphany event that I felt were great for the type of scene that was being suggested to me.

Getting back to the beard, I really like that Vista came out swinging after the release of the “Gerard” head by also releasing this beard that fits just right on the face and is similar to other beards you can find for heads made by CATWA but only fit certain ones only. “Jacob” is just for the “Gerard” head and will not fit any others and it adjusts with your face sliders as well for a fit second to none.

When Gabriel releases a gacha set I generally have a lot of interest in it and there are so many that I’m saving for the right moment but after getting really lucky with the machine at the latest round of The Epiphany I thought it would be good to use it for this photo. I am wearing shoes from the set but with the angle I chose they didn’t make it into the actual photo but I will also add a pic of the key so that if you see items from the set that you want you can grab them and now would be a good time to do so as the event’s been open a while and will not be so crowded you would feel like you’re wading in quicksand.

The outfit feels very mercenary like which is the vibe I wanted to give off and I think that I pulled it off well enough that it won’t get lost in translation. Of course I played to win all of the black items in the set and managed to do so in a very limited number of pulls of the machine which rarely ever happens for me. I’ve seen quite a few photos with people wearing some of these items (including the rare coat) but I chose not to with feeling that mechanically if I’m dealing out punishment it would hinder the process. 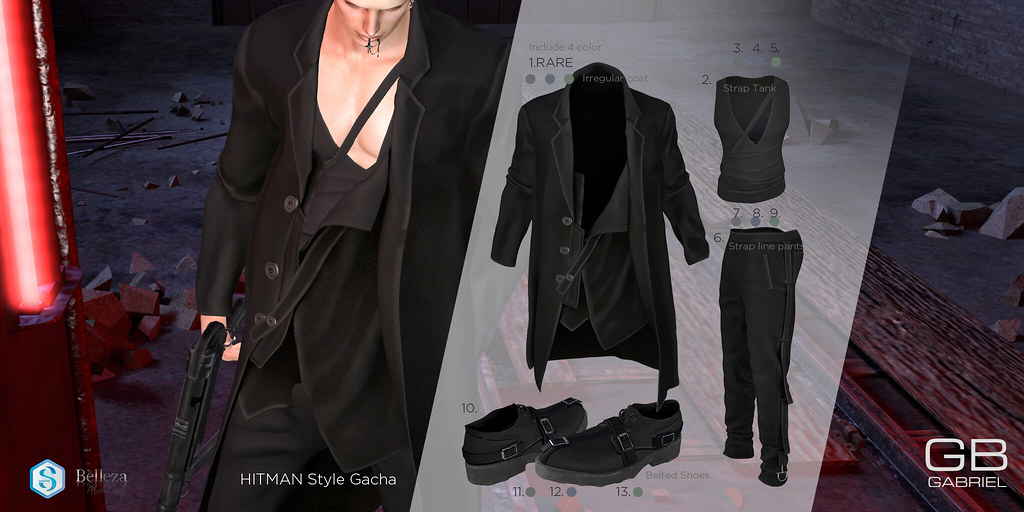 With the weekend approach I hope that I can get at least another planned photo session done because there are several ideas that I have stirring around in my head but it really all boils down to time and having enough of it free to accomplish something.

As I wrap this up and leave you with the credits, I would like to thank Travis Olbers for inviting me to join him to work on a joint photo. It was a lot of fun and I certainly would enjoy doing it again in the future (and hopefully it doesn’t take us forever to set something up again right? Haha). Have a great weekend everyone and until our paths cross again, onto the next conversation…