Kiss me out of the bearded barley
Nightly, beside the green, green grass
Swing, swing, swing the spinning step
You wear those shoes and I will wear that dress.

Sixpence None The Richer, ♫Kiss Me♫

Once again I am going outside of my norm by dusting off the lady version of myself and I’m sure there’s a joke in there about me getting in touch with my feminine side but we can save all that for later. I’m starting to branch out a little bit and maybe slightly abandoning the “strictly male” blog label in exchange for allowing myself to have the ability to create things and not limit myself.

You might think that I’d get annoyed when friends, family or fellow bloggers send me items they’ve played from a Gacha machine that they don’t want but honestly it gives me a chance to see what I can do from another perspective. When I received the Serenity Style “Choiboy Cloud Backdrop” I knew that there wasn’t anything that I’d likely be able to figure out to do with it for myself. That’s when I put on the old thinking cap and started brainstorming and remembered there was a really great swing pose and prop from Ardent Poses at the Pose Fair right now and my plan was taking off. 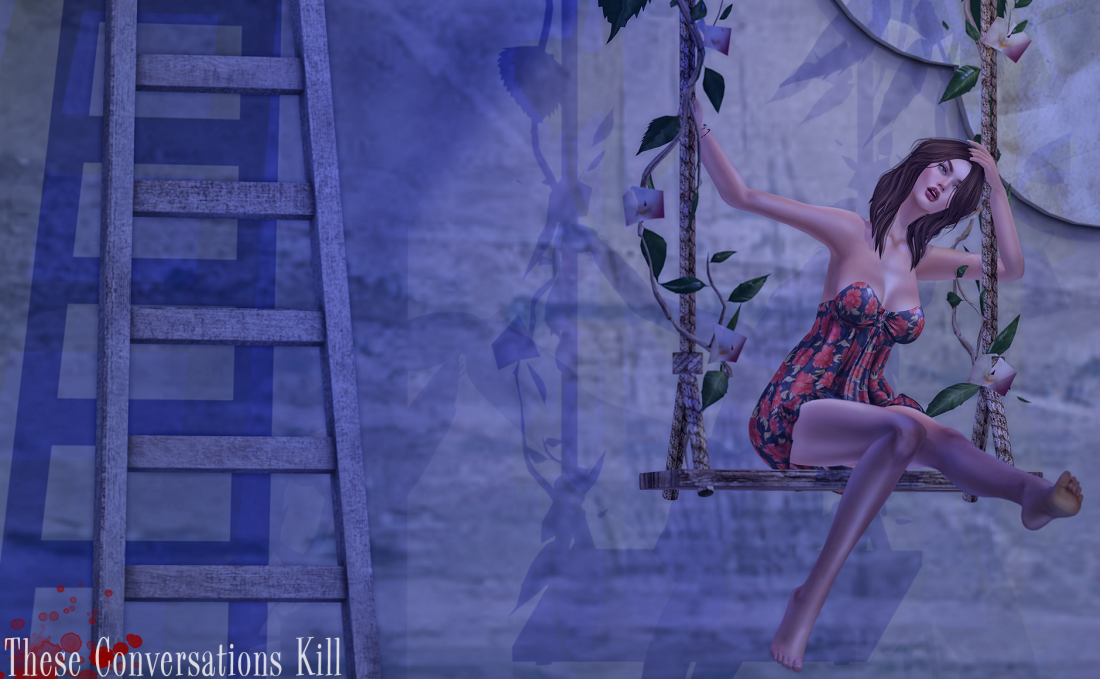 “Hanging By A Moment” is a gacha that contains 10 poses (8 commons and 2 RARES) and features a flowered porch swing (or it could just be a swing placed just about anywhere as you can see from my photo. Normally you would think blogging the RARE would have been my aim but I’m sure it’s probably been done ad nauseum by other bloggers so I took the road less traveled and went with one that I thought looked cute (yes I said the word cute).

Coming up with an outfit was something I though could be difficult but the fact remains and it has pretty much always been that females have the corner of the market of everything in-world so really all that was needed was to take a look through events and their shopping guides and I’d find what I wanted…which was to be very simple and down to earth, sweet if you will.

I find it amusing that it takes me longer to put things together for Brena (yes I decided it would be easier if I stopped constantly referring to her as female me or fembot and also it’s a play on my name so it works and is also a good song by A Perfect Circle). I worked with a few different hairs but was not catching the right vibe and then I went to The Epiphany because I had my sights set on the RARE “Macaron” Hair from Navy+Copper. It only took a few plays to win it thankfully but it was worth it for having color choices to choose from as it was the Fat Pack.

It was also the right length that I wanted without getting in the way of anything or digging into her like the previous hairs I tried had.

3/4 of the outfit was complete and all I needed was a dress that would go with the idea of the swing which had flowers entwined into it, which reminded me of the latest creation from Apple May Designs currently at Collabor88 called “Country Girl”. One thing that makes things easier when I’m styling Brena is that just about every designer on the planet creates clothes for Maitreya so I will likely never have to worry about finding something to wear for her as opposed for myself not everyone makes clothing for the Belleza male body all the time.

As I said the contrasts between these two worlds is there and many people realize it but at the same time many do not or prefer to be blissfully oblivious to it.

Now that I’ve done two solo blog posts with just Brena in them, I feel more confident that I can do that from time to time when ideas and items that appeal to me that I’d like to feature her for is possible; it also gives me a chance to do poses that I might not have done in the past that involves a more couples feel. That way there won’t be any missed opportunities or chances to visually post ideas that have circled my brain.

That is all I have for this blog post, remember that you have until the 30th to get to Pose Fair to check out Ardent Poses and until the 6th of May to get to Collabor88 to check out all the things they have to offer.

Until our paths cross again, on to the next conversation…