I’m a paranoid, sycophant
Masochistic dilettante…
Narcissistic elephant in the room
I’m the end of the world
Thinning the herd
The all around outta my mind, fucking absurd
I am gone
I am gone

♫Into The Fire♫ – Asking Alexandria

Coming up with inspirations for blog posts can take many shapes and forms. It could be an idea that you might have seen in a movie or perhaps a music video…it can even come from a song itself where the words have clung themselves to you like an octopus to a sea faring vessel. That is the case with this particular blog post, it is kind of two parts as to how I decided to put this together.

When I first heard the song “Into The Fire” I thought it was really one of those hard rocking, get your blood pumping tunes that you could certainly throw onto a playlist as you worked out, power walked, or even amped yourself up for playing a game with or against friends online. Any or all of those things would be plausible because this song can get into your adrenaline as it did mine.

I stumbled across the video that was done for it on YouTube and it was patterned a lot after Frank Miller’s “Sin City” comics and movies that bare the same name. Very noir graphic novel type action mixed in with video of the band playing their instruments. As much as I like the noir feel of that part of the video I didn’t really want to go quite to that Frank Miller type place so I figured maybe I could put my spin on standing on a white pillar surrounded by other white pillars of different sizes with some of them burning. I kept my look super simple and most of it were just things I had blogged before that I knew might work for the look combined with a few new things that I had not blogged before that were waiting to find their way onto the page so others could take a look at them.

New rounds of events are going to be starting in a few days so there are likely going to be things from the events that opened in the last half of February combined with these new events starting at the beginning of March. I have plenty of ideas kicking in my head that I want to transfer onto digital art and this blog and I am really hoping that I’ll be able to up my postings for the month of March. I’m getting really close to my anniversary of when this blog went from being a thought to becoming a reality.

The Shop Your Heart Out event may be over but one of the goodies I found there found it’s way into this look. As much as I wanted to get it put into a look before the event ended some things came at me this past week (along with the unfortunate grid attacks that made it tough to do anything other than stand stationary for a day or two). Those setbacks aside the above photo gives you a great up close look at the “Boy Next Door” hair from Exile that was at the event and will be at their store soon if it isn’t right this minute. I purchased the Naturals pack with the feeling that I wasn’t going to wear anything but basic colors with this hair (your normal black, blonde, brown, and if the mood really struck me red). I made sure that I wore the Exile hairbase which you can also purchase at the store (and you’ll have a taxi to take you there down in the credits).

The rest of my face, beard, skin, and body are all items I’ve been wearing for a while which I feel have become a part of me and have cemented more of my online identity as of late. From time to time I’ll have other skins and things to blog to inform you of but as for normal day to day living this is what I’m the most comfortable in and what I enjoy the most. 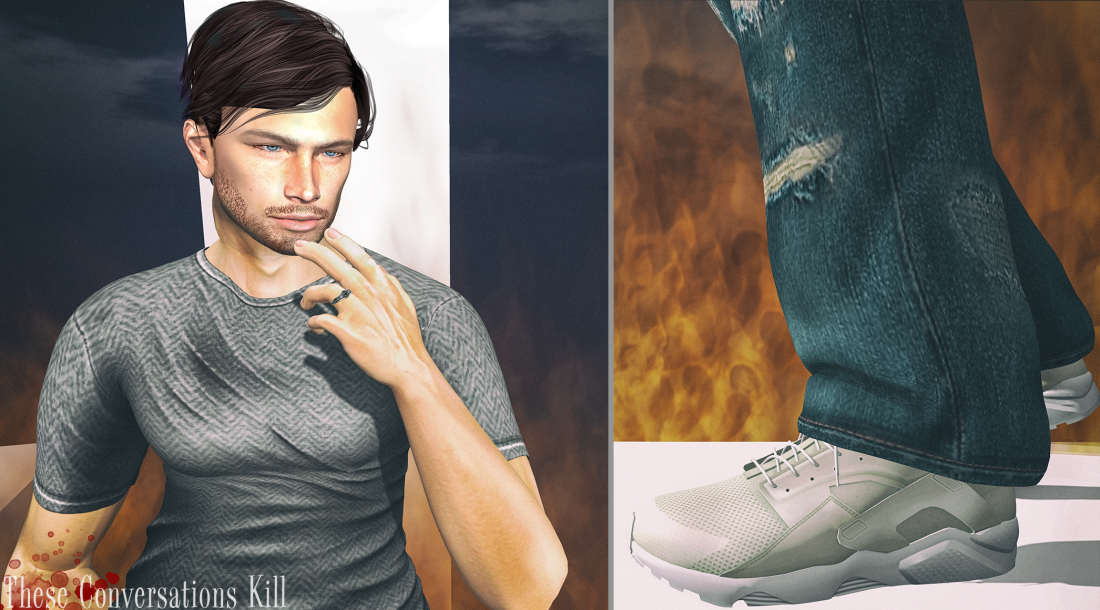 As I had mentioned earlier, I kept my outfit simple because I didn’t feel this post needed something sensational or over the top and honestly most people that are in bands these days don’t wear anything fancy usually either so I figured t-shirt and jeans and sneakers would be just fine for it.

{FE Style} has always been a brand I’ve liked for the longest time but sometimes they haven’t always released items for the body I’m wearing consistently at the time but when they do I usually jump on it because it always looks and fits right. The Basic v3 T-Shirt is one that I’ve worn before in a blog (I recall the “Weird But Nice” shirt that was a part of the Fatpack as one of them) and they are really nicely done. I’m wearing the Gray version for this blog and I hadn’t noticed before that there is a bit of a chevron pattern to it which makes it a little more cooler.

L&B Swear is another brand that I’ve stated is been a part of my wardrobe choices for quite a long time as well. I recently got an update of their Destruction Jeans (which added a fit for the Belleza body as well as a tucked in version for one of there newer boot releases). I went through the different denims (as I did purchase the Fatpack of this as well) and seeing as how I can’t remember which one I blogged last time (forgive me some time has elapsed) I hope I didn’t wear one I’ve already blogged. I usually try my best to stay on top of that kind of thing.

For footwear I picked some sneakers from a little known place called ROC (which is a play on the store owner’s name). These low top shoes have 25 colors to choose from in which you can recolor 5 different parts of the shoe. There is also 5 preloaded “classic” colors that are likely patterned after real shoe styles that have been out in the public at some point in time.

Lastly we have the pose set I chose and it’s a collab between WRONG & The Owl. They have been working together for several months now (probably even more than that honestly) and have come up with some really excellent poses together. With all the different pose stores I like and have been displaying in my work I won’t be able to say that I don’t have any poses I can use for a shoot. The poses that I used in this blog entry are from the #11 pose set (which I believe was originally a Men Only Monthly release to begin with). There are 4 different static bento poses for you to choose from to make you look absolutely awesome in whatever way you choose to photograph yourself.

That ought to about do it for this entry but be sure to come back soon when I’ll have more news and goods from the grid along another song/artist for you to take a listen to (that you either know or will like and learn more about).