But if you like causing trouble up in hotel rooms
And if you like having secret little rendezvous
If you like to do the things you know that we shouldn’t do
Then baby, I’m perfect

Valentine’s Day has come and gone (as of this writing it’s been a week) but unfortunately I was not able to spend it with the one I love for circumstances which were not able to be controlled. So despite it being late, I wanted to do a photo shoot with her that not only I could use for this blog but to also collect for our memory scrapbook (a work in progress).

One of the best things is when we’re able to do these it takes really no effort at all and the creativity just seems to flow like a gentle stream. I have had the idea for this particular scene in my head (along with the chosen soundtrack) for a long time but not every piece of the puzzle was readily available until recently. I found two great backdrop/skyboxes and two different sets of poses that really set up a photo shoot that turned out great. 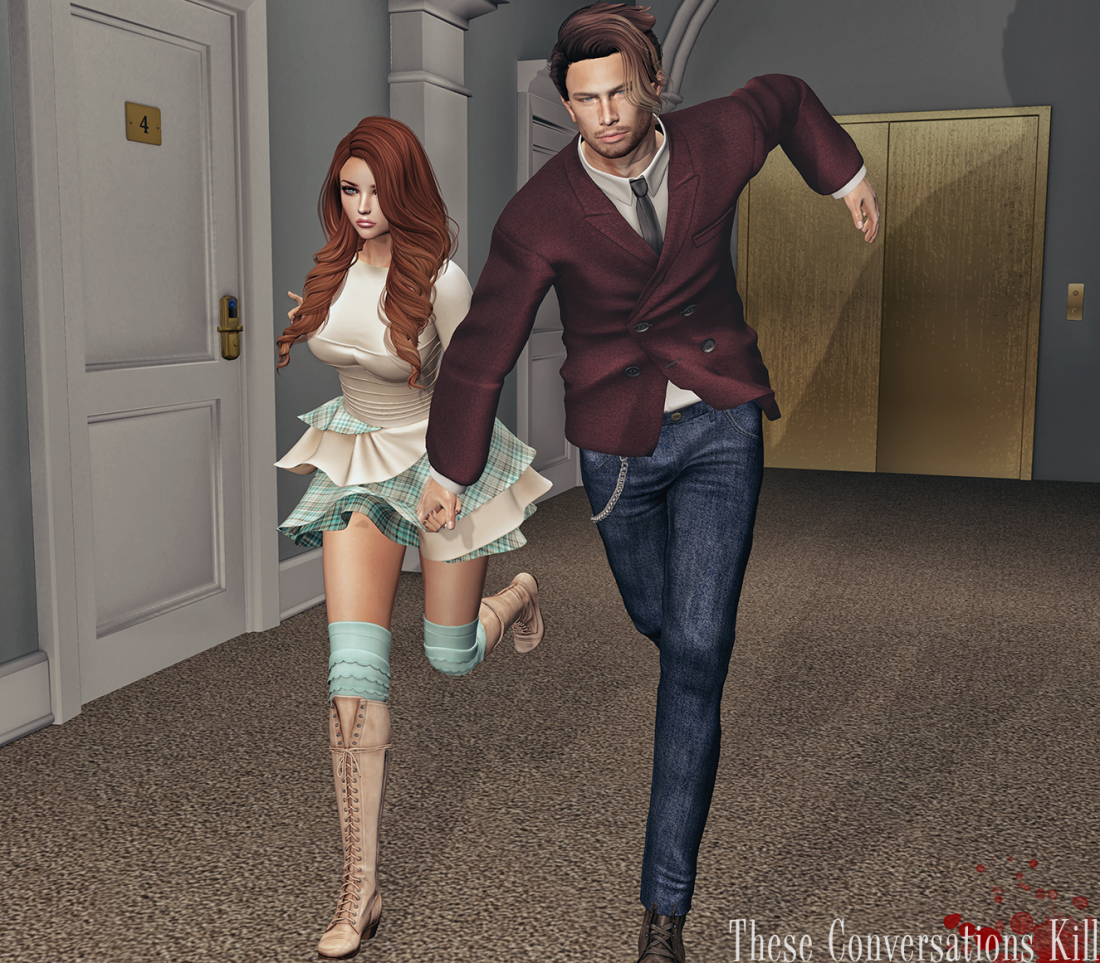 Sometimes songs tend to be catchy regardless of if they are in your favorite genres and this was definitely the case for the soundtrack to this blog post. One of the things that caught my attention was the part about hotel rooms. I thought it would be really interesting to have us running through a hallway of a hotel to get to a room where more than likely all sorts of no good would take place.

My vision became more of a reality when Paparrazi released their “Hotel Hallway” backdrop and I already had the Ana Poses “Let’s Just Escape” pose ready for whenever I could find the right hotel setting. I based my look also upon what a celebrity might look who is courting a young lady but also trying to get away from the limelight. Makes sense doesn’t it?

The hairstyle that I am wearing is a Valentine’s gift at the Shop Your Heart Out event put on by Linden Labs. This hair is a medium to long length and you get the entire FATPACK just for browsing around the event. There are 10 different color HUD packs in the product and I went with the Mix 2 HUD. The Shop Your Heart Out event is currently running until the 26th of February so there is still time to grab this up and a lot of the other great gifts from various stores.

FaMESHed was the destination where I picked up this really cool outfit from [Gild]. It is one whole outfit so you don’t have to worry about putting on separate clothes and comes in 3 other colors (Black, Blue, and Yellow). I like how they paired the suit jacket, shirt and tie with the jeans that has the pocket chain with it (which instantly caught my eye). The outfit is fitmesh and should fit just about all the current male mesh bodies with the right alpha cuts selected. There are more an more products from the [Gild] brand that have been getting my attention so I think I’ll have to continue keeping my out out for their releases.

For the second part of the blog which I would call the after (the hallway was the before of the story) what you see is the inside of the Hotel room which is from the “Room 214 Skybox+Backdrop” from Sayo. It’s really a well put together build and at some point I would like to shoot more parts of it but since I did not really need it for the image I had in my head I get to do it another time. Both the Paparazzi backdrop and this Skybox worked as a whole in a tremendous way; and if you haven’t been to Uber yet now is the time so you can take an up close look at this build for yourself before it closes on the 23rd of February.

Image Essentials created several different poses called “Sweet Nothings” with each one being released at a different destination. This is the third pose in the series which was given a main store release. I had a hard time deciding between pose 2 and pose 3 but I thought that three had the best angle coverage for what I wanted to do and would work best for me. It’s bento enabled so for those of you with bento bodies you’ll be able to benefit but for those of you without one (and at this time there are very few who do not) it will not work for you.

I wanted to give a little bit better look at the pocket chain on the pants of the [Gild] outfit with a close-up shot and also an up close look at the other side of the “Adam” hair by Exile. Honorable mention goes to {kokoia} for their “Gangsta” shoes which I’ve previously blogged in earlier blog posts or I would have given them an even better look as well. All of the things I pooled together made for a the process of posting this really effortless and a lot of fun.

Now I think it’s time to wrap this up for this one because I’ve got more projects to work on and perhaps some mischief to get into with the better half. See you around for the next one.