“The jury is coming
coming to tear me apart
all this bitching and moaning
Come on, it’s on!“

“Not Meant For Me” – Jonathan Davis ♫Listen♫

This my first Halloween inspired scene for 2017 and I feel like I’m starting off strong. This is intended to be a two part post in which the second will come within the next week as a collaboration with some fellow blogger friends of mine. I’m not going to give away all the details because I want to garner some interest for readers to come back to take a look. 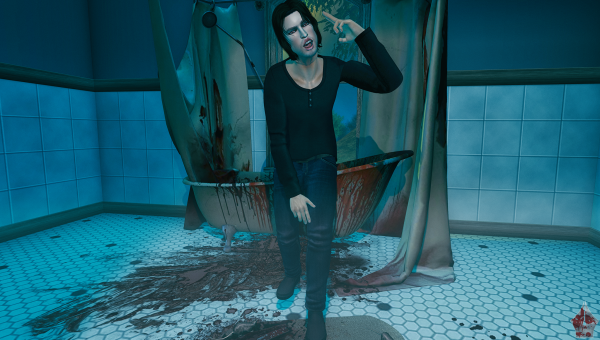 Ever since I was younger I had a fascination with vampires and their myths. From television shows such as Dark Shadows and Moonlight to films like Salem’s Lot, The Lost Boys, and 30 Days Of Night as well as classic novels by Bram Stoker and Anne Rice featuring titillating characters of the undead variety. I have always been drawn to the stories of their struggle and romanticism behind them. A lot of people love these pop culture icons that have withstood the test of time itself.

This particular photo session was inspired by “The Queen of The Damned” film starring Stuart Townsend and the late Aaliyah. I was fortunate enough that the LeLutka Andrea bento head comes with a pair of fangs to help me complete my look.

The scene was shot on location at a friend’s Haunted House which will be opening soon but is not yet completed which is why at this time I won’t be providing a taxi as it is not yet open to the public. When it does become available I will give you an update in a future entry.

Brands contributing review copies for this post include Go&See with the “Robin” shape and “Christian” skin (which I have shown in previous posts) as well as MESANGE with their “Arden Eyes” that I’ve also displayed in previous entries.

This particular post has a heavy presence from the Hipster Men’s Event and also The Men’s Department. Upcoming coverage is going to include the new round of Men Only Monthly as well as Shiny Shabby and The Epiphany. I intend to visit some others as well that I hope to utilize products from.

I hope you enjoyed joining me in this adventure and I will be back again soon with another installment. Below are the styling credits with transportation to the stores and events all products can be found at.

This is the first shape created for the LeLutka Andrea head by Go&See. While I am wearing their “Christian” skin, I’ve found that several other Go&See skins work just as well with it and I am sure with other experimenting other brands could work as well. It also comes with a brow shaper and style card for those who want to nab the look out of the box.

For casual clothing lovers, etham is one of those who always knows what products to create for long term wear. As a personal preference, I like long sleeved shirts that do not have collars and this Henley shirt is just the thing. I picked up the Fatpack because the price of it alone is well worth making use of the dozen colors you can change via the included HUD. You can also change the button colors as well for extra functionality.

For the second straight month, K&S has released another “Fearless” 3 pose set at Hipster Men’s Event. I’m not sure how long it will continue but I’ve been enjoying these so I do hope that they continue to so I can continue to feature them in my scenes.