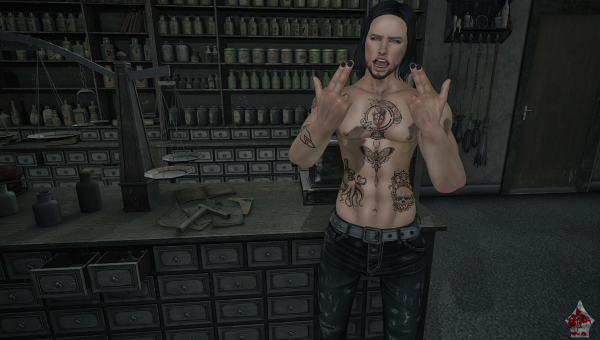 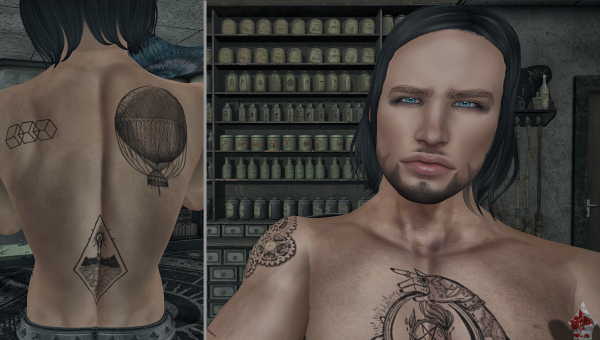 One of the things I enjoy is doing photo shoots on location. It is one of those things where the ambience of the chosen place can be the difference between a good photo and a great photo. Sometimes for whatever reason sims close and leave a giant whole in the blogger photo taking experience. When I heard the news that Ironwood Hills was closing (where I’ve taken quite a few photos in the past) I knew it would create a void for me personally. However, not too long after the announcement they had found a way to remain open but they were going to be doing some things around the land. Ironwood Hills is now back open to the public and has been for a while but this is my first time returning and I was quite happy to visit there and find a nice spot to snap at.

As you might have seen in previous blog entries, TMD is chock full of great items but for me I’ve managed to purchase quite a few skins from the event. For this look I’m wearing the “Sam” skin from Clef de Peau. It is for the Catwa Head family which right now only consists of Daniel but coming soon will be the Stanley BENTO mesh head on the 15th of this month at the ULTRA event. The package includes the applier as well as the eyebrow shape and two body shapes (one for Daniel and one for the new Stanley). Also if you are the owner of the Absfab body appliers for Gianni, you can go to the CdP main location and pick up an updated version with the “tight” body applier.

The facial hair I’m wearing comes from the [GA.EG] brand and can be found at their main store. “Razor Blade” is just as it’s described, it’s a chin strap style beard with sharp points on both sides of the jaw and one right in the middle of the chin with a small bit of upper lip hair. The version I have is compatible with omega applier enabled products.

As I may have mentioned previously, Reach has three different items for you at The Dark Style Fair 4. In addition to the two shapes for sale, they have a tattoo called “Steam Machine” which has various images for you to enhance your avatars epidermis. At first I thought by the name it would be more of a tattoo in the “steampunk” genre but with what I know of it, which I will admit is very little, I do not believe there is a correlation. The product includes two different applier HUDS: one for [SIGNATURE] Gianni and one simply for any Omega applier enabled bodies.

For my hair in this look I decided to get a little creative after I saw an ad for the Beausy standard group gift, which is the “Delilah” hair with a HUD for naturals tone. While yes this may be a hair that was created for females in mind, it can easily be worked to work for us fellas as well. There’s nothing lost heading to the store and just joining the group for free and picking it up. It’s a nice shoulder length hair that really could be almost though of as unisex.

Some time has passed since I did a “Marketplace pick” so let’s welcome that back for this post. When I was scouring for some bento poses which still are not as common as they should be, I stumbled upon the work of Reve Obscura. Not only are the poses in her store well done but they are quite affordable where you might want to look at what else is being offered and stock up! I am using the “Shots” pose which some might be familiar with and I’m not embarrassed to admit this is most commonly associated with professional wrestler Jeff Hardy.; in a way is who I styled my look after for this photo session.

Honorable mentions for this look are the returning “Destruction” jeans by L&B Swear as well as the “Ardor Eyes” by Avi-Glam.

Now that you know just about everything that went into this look you can take transportation to the stores and events featured here and while you are at it, go take a look at Ironwood Hills. It is a sight to behold and if you are someone who likes to role-play there are always people around that might be interested in participating. Thanks again for checking in and I’ll see you again. Until next time as always, stay stylish fellas!