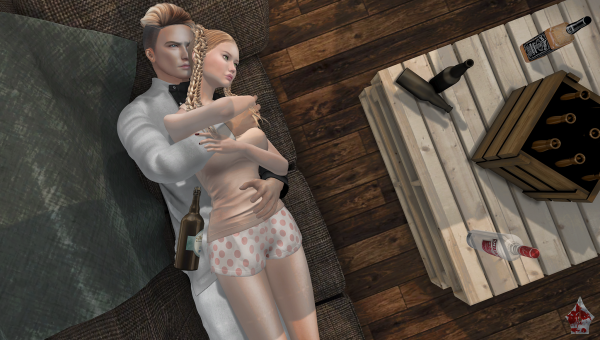 Every now and again I get requests and things to visualize my take on songs and some of them I know and others I get familiar with to get a good idea of how to represent it. This particular entry is one of those special ones that a friend of mine asked me to try and tackle. It’s one of those songs that only a fair of people know and surprisingly when I was asked I knew it but the key was to try and do it justice. I feel that I did it justice and with the help of my assistant, Bianca, I was able to make it possible.

The skin I am wearing was to be one of my last items for Skin Fair 2017 coverage but some things came up that I was unable to finish this until after the event ended but it is very likely within a short amount of time it will be available in their main location. It’s one of their first for the Catwa “Daniel” Bento head. I chose to go with the peach tone because it was the best fit between super pale and a more tanned version.

For my shirt, I’m wearing the “Constantine” shirt by Aitui that’s available at the current round of FaMESHed that ends on the 27th. I thought this pulled the idea together being that the inspiration for this entry is similarly titled. There are several different color combinations to choose from by I chose the “crow vs dove” version which essentially is black and white.

I paired it with the “Shoe Cut Jeans” in white by ::K:: and even though I am wearing the NX-Nardcotix “David” body, the best fit for these jeans was for the SLink Physique body which I was able to avoid clipping with the shirt.

Lost & Found has once again started a new round full of great items such as skins, poses, furniture & decor, and what I am featuring for this session: eyes. MESANGE just released the “Manderley Eyes” and you can get the 15 different colors individually or all together by buying the FatPack (which is easily the best value for really good eyes). These eyes have the standard mesh as well as an Omega Applier friendly HUD to be able to change them. Not only that but you get the choice of what size pupils/iris’ you wish to have with the HUD as well.

Tableau Vivant has a new hair that you can pick up at Men Only Monthly called “Hudson” it has a nice shaved hairbase applier included and is a side parted style that I chose to go with a rooted blonde color to try something a little different considering almost always I go for black or brown hair and occasionally blonde but not often.

The tanktop and shorts outfit is a part of the Tres Blah “Slumber Party” gacha that is still available at The Arcade until the 31st of March. It is definitely a cute addition to your closet for a night in.

I hope you enjoyed this entry and if you the reader may have a request, you can either contact me personally or leave a comment on the blog itself and I will read it and see what I can do with what I’m given. These are the kinds of challenges I enjoy.

There’s more goodies to come including items from Shoetopia which just opened a few days ago. Keep an eye out and I will see you again soon, here’s the credits. Until next time, stay stylish fellas and for the ladies keep it classy!